16-y-o gunned down at hangout spot 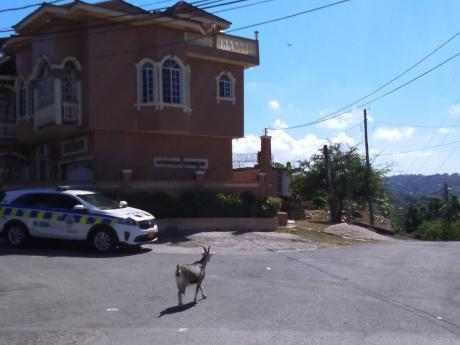 Police personnel deployed at the entrance to the community of Peace View, in Albion, St James, which has been transformed into a ghost town following the murder of a teenager, and the injuring of another by gunmen.

A heavy detachment of police personnel have been deployed in the communities of Peace View and Cassava Walk, in Albion, St James, following a flare-up of gang rivalry on the weekend, which has left two persons dead, including a teenager.

The deceased have been identified as 16-year-old Omarion Campbell, student of Peace View, and Adrian Kemar Alexander, 26, otherwise called 'Fadagad', recording artiste from Mount Salem, but was living in Cassava Walk. A 13-year-old boy who was shot and injured in one incident remains at hospital in serious condition.

Reports by the police are that about 5 p.m. on Saturday, Campbell and the other teen were at a salon and cafe in Peace View when two motor vehicles, with several men on board, drove up.

The men, who were armed with handguns and rifles, opened fire inside the cafe, hitting both teens. They then escaped in the waiting motor vehicles.

The police were summoned and upon arrival, both teens, who were discovered suffering from gunshot wounds, were transported to the Cornwall Regional Hospital where Campbell was pronounced dead, and the 13-year-old admitted in serious condition.

When THE STAR visited Peace View on Sunday, the streets were empty with only a team of policemen and stray animals outside. One lawman told the news team that the attack on the teenagers is believed to have stemmed from the murder of Alexander in Cassava Walk the previous day.

Investigator say Alexander and his business partner went to a recording studio in the area when they were attacked by armed men who shot him to death. Following the murders, the police carried out a number of operations in the area and neighbouring communities, which has resulted in several men being taken into custody. Since the start of the year, 38 persons have been murdered in St James.