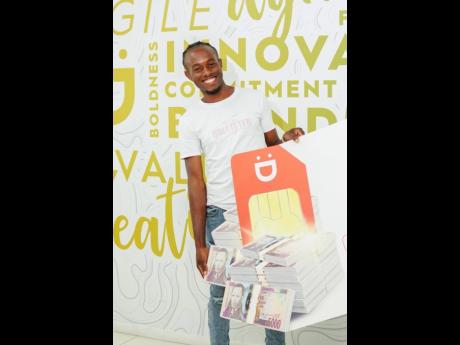 Twenty-two-year-old yam farmer, Kayson McKoy, is now many steps closer to pursuing his dream of becoming a household name in agriculture. He's the first winner of $1 million in the Digicel Golden SIM promotion.

"I was completely shocked," McKoy said. "I never believed I could be a winner," added the former Albert Town High School student.

McKoy entered the agriculture business in 2019 when he began farming a small plot of land in Lowe River, Trelawny, where he now grows over 1,500 heads of yellow yam. The business has since expanded to include the production of ginger and sweet potato.

McKoy plans to increase his production and said that his winnings will go a far way in helping him to achieve that goal.

"I'll get to help out my mother finish her house and extend my farm to make more money and build my future," he said.

Meanwhile, Carla Hollingsworth, brand marketing manager for Digicel, said "We are touched by Kayson's drive and ambition to succeed, especially in terms of how this Golden SIM win will help him to get there."

The 21-week Golden SIM promotion runs until November 6, 2022. Each week, a Digicel prepaid or postpaid customer will have a chance to win $1 million, if the serial number on their SIM card matches the weekly Golden SIM number.

The winning number is posted every Tuesday on Digicel's social media pages, newspapers, the MyDigicel app, and balance enquiry messages.