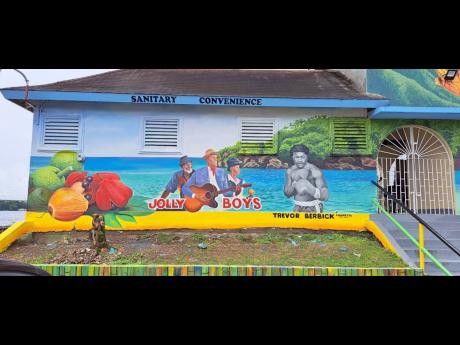 The public bathroom in Port Antonio, Portland on which murals of the Jolly Boys and former heavyweight champ Trevor Berbick was painted.

Relatives of later former world heavyweight boxing champion Trevor Berbick have expressed outrage at what they described as the wanton disregard shown to one of Portland's iconic figures.

This as Berbick's portrait now lies on the walls of a public sanitary convenience facility. A mural depicting Berbick, who was a native of Norwich district, and members of internationally known mento band Jolly Boys, are among the portraits being displayed of the facility in the parish capital Port Antonio. But while admitting that it is probably a good thing to honour her brother, who was Jamaica's first and only world heavyweight boxing champion, Beverly Desley said that when she first saw the mural, she got very angry.

"I know it wasn't meant with any disrespect but it's just the stupidity of the persons who put it there," she said. "It is inappropriate and in poor taste. I went to Port Antonio on Saturday and I didn't even see the mural. And of course on Sunday I drove pass to look at it. It is just stupid. Anyway, when I passed back I really said 'these people are just simplistic'."

Desley reasoned that whoever the coordinator is, the individual should have experience in such situations.

"So you look at a mural like that and what is it doing on a sanitary convenience? It had the Jolly Boys to the left and then Trevor. And there is a picture of rafting on the Rio Grande. It's not just Trevor, but it is just that fact that it is persons. No persons should be on it. No icon like that. The minute you think about Trevor Berbick you think about Carder Park. If you want to put something on a sanitary convenience I'm thinking more like a landscape or flowers," she added. Since the painting of the mural, there have been mixed reactions from residents, with most maintaining that the concept is a good one but the implementation was wrong.

As a professional boxer, Berbick competed from 1976 to 2000. He won the World Boxing Council heavyweight title in 1986 by defeating Pinklon Thomas, then lost it in his first defence in the same year to Mike Tyson. Berbick was the last boxer to fight the legendary Muhammad Ali, defeating him in 1981 by unanimous decision. Berbick is the only boxer to have fought Ali, Larry Holmes, and Tyson.

Berbick's body was found near his home in Norwich on October 28, 2006 with four chop wounds to the back of the head. The boxer's nephew, Harold Berbick, and another man, Kenton Gordon, were convicted of the murder in 2007.

Meanwhile, the Jolly Boys are a mento band from Port Antonio, Jamaica. The band was formed in 1945 and had great commercial success in the late 1980s and 1990s among reggae and world music fans. They released a new album in 2010 titled Great Expectation.