Woman swept away as heavy rains lash Trinidad and Tobago 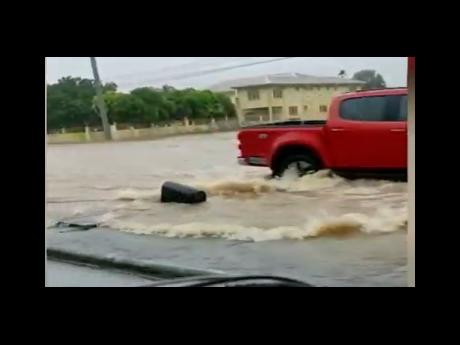 Floods caused by heavy rains in Trinidad and Tobago Contributed

PORT OF SPAIN, Trinidad, Oct 5, CMC – The search is continuing for a 44-year-old woman who is presumed dead after she was swept away while attempting to cross a ravine as heavy rains lashed the twin island republic on Wednesday.

The Trinidad and Tobago Meteorological Service (TTMS) said that the Yellow Level alert issued as a result of the adverse weather would remain in place until midday on Friday.

Police said that the woman, Teresa Lynch of La Pastora Village, Lopinot, located in the foothills of the Northern Range, was reportedly with her 45-year-old brother and a third individual who were attempting to cross a ravine when she slipped into the rushing flood waters.

Her two companions attempted to rescue her, but they encountered difficulties in the rising waters, and were unable to reach here.

The TTMS has warned that the adverse weather would be accompanied by “periods of rain and/or showers of varying intensities…as an active tropical wave traverses westward over our area.”

It said that there is also a 70 per cent chance of heavy showers and thunderstorms that can produce intense rainfall in excess of 25mm and warned also of gusty winds in excess of 55 kilometres per hour.

“Street/flash flooding and localised ponding are also likely in heavy downpours and seas can become agitated at times in sheltered areas. People are cautioned to watch for flying hazards during gusty winds, while landslides/landslips are also possible in areas so prone.

It said Thursday  expected to be “cloudy to overcast with periods of light to moderate showers and rain and a 70-80 per cent chance of occasional heavy showers and thunderstorms”.