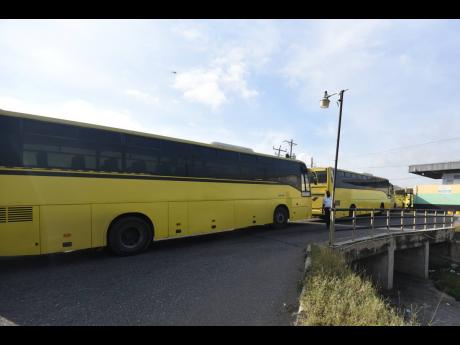 Four men who are accused of stealing gasolene from a Jamaica Urban Transit Company (JUTC) bus were unable to make their first court appearance on Thursday, as strict security measures were enforced at the Kingston Central lock-ups, following news that a detainee had escaped.

The accused Oshane Halyes, Kemar Patterson, Overton Rowe and Anthony Panson are charged with simple larceny. However, after St Catherine's most wanted man Rudolph 'Boxer' Shaw escaped custody at the lock-ups, the four men were not brought before the Kingston and St Andrew Parish Court. A police officer informed the court that the men would not be brought in. Senior Parish Judge Lori-Anne Cole-Montaque added that it would be a great challenge for the men to appear in court on October 7, given the security measures that would have enacted following Shaw's escape.

"The possibility exists that there might be a challenge because of a particular situation that took place at [Kingston] Central lock-ups. So there is some sort of a lockdown and the men might be affected by it," she said. The matter was then adjourned until October 14 and it is expected that a bail application is to be heard at that time.

The allegations are that on September 20 at 11 a.m., police were on patrol in the Kingston 4 area when they noticed a JUTC bus parked along the roadway. Hayles, the alleged driver of the bus, was sitting in the vehicle, while the other accused were seen with plastic containers taking gasolene from the bus.