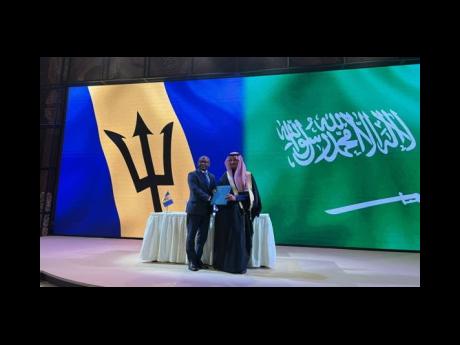 BRIDGETOWN, Barbados, Nov 30, CMC – Barbados has signed a memorandum of understanding (MOU) as well as an air services agreement with Saudi Arabia in an effort to further develop relations between the two countries.

It said that the signing took place at the World Travel and Tourism Global Summit, which is being held in Riyadh, Saudi Arabia and that the agreements symbolise the growing relations between the two countries and provide an opportunity for Barbados to expand its global reach.

“The agreement that we signed today will go a long way in furthering our ties with the Kingdom of Saudi Arabia. It will also explore opportunities for mutual cooperation between both countries in the respect of tourism,” said Gooding-Edghill.

He said that there are also other benefits that Barbados will derive from this MOU as Saudi Arabia seeks to develop and expand its tourism sector and as Barbados aims to expand its reach.

The MOU will promote friendly relations and united efforts to achieve sustainable tourism development in both countries. Through this partnership, both countries will benefit from each other’s rich local traditions and social values.

The statement said that the air services agreement will facilitate the expansion of international air service opportunities, making it possible for airlines to offer travel and shipping services between the two countries.

Barbados is part of a special joint Caribbean event which will be held on Thursday, affording an opportunity to promote Barbados’ tourism product and identify investment opportunities with the Kingdom of Saudi Arabia, the Arabian Gulf and the Middle East.