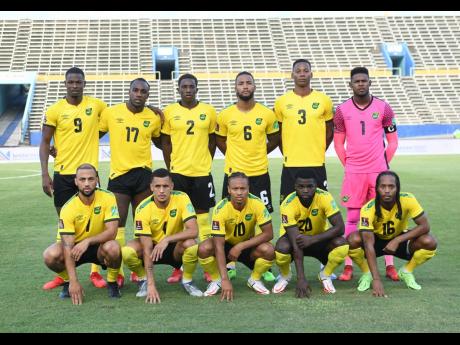 The Reggae Boyz line up at the National Stadium devoid of spectators prior to their September 5 World Cup qualifying football match against Panama. Jamaica lost the encounter 3-0. Football stakeholders have expressed disappointment that the Government has not granted approval for fully vaccinated persons to attend the Reggae Boyz next home World Cup qualifier against the United States, on November 16.

Local football stakeholders have expressed utter disappointment at the Government's decision not to allow spectators inside the National Stadium for the Reggae Boyz's next World Cup home qualifying game against the United States on November 16.

The Reggae Boyz have played their two 'Hexagonal' World Cup home games behind closed doors, because of government's COVID-19 measures.

So far, they have taken just one point from a possible six in two home encounters.

Home venues generally provide resident teams an advantage in football. When Jamaica made its historic qualification to the FIFA World Cup Finals in France 1998, the National Stadium was a fortress, with the Reggae Boyz winning practically all their games there, except 0-0 draws against the United States and Mexico.

The Jamaica Football Federation (JFF), the ruling body for the sport locally, has been negotiating with the Government for fan access to its home World Cup qualifiers, on the basis that only fully vaccinated fans are allowed and in certain numbers.

Minister of Local Government and Rural Development, Desmond McKenzie, announced on Tuesday that football fans would not be allowed inside the National Stadium for Jamaica's upcoming World Cup qualifying match against the United States.

"We examined the possibility of allowing fully vaccinated spectators to attend the November 16 game and concluded that given our delicate stage of managing the pandemic, as well as the extensive logistical inputs needed to ensure that only vaccinated persons enter the venue, it was simply not practical to give the green light for public access to this game," McKenzie explained.

"However, discussions will continue regarding the possibility of allowing vaccinated spectators into the 'Office' for the following World Cup qualifying home match against Mexico on January 27, 2022," McKenzie advised.

With COVID-19 measures being relaxed at the weekend, many fans were expecting the Government to give the Boyz a boost by allowing fans inside the National Stadium for the upcoming home match. But for the third FIFA window running, that has not materialised.

Professional Football Jamaica Limited (PFJL) chairman, Christopher Williams, said fans could have been allowed inside the National Stadium and that the call was 'conservative and disappointing'.

"It is extremely disappointing and as a football fan and an administrator of the sport it is too conservative," said Williams.

"I believe the Government is missing an opportunity to penalise people who are not vaccinated and start to highlight the luxuries of life between the two groups. But the vaccinated continue to be punished," he pointed.

He said the stadium could have been segmented into blocks of about 25 people, to allow the Boyz much needed support for these important fixtures.

"The stadium is big enough and there are enough entrances. Even if there was a fear vaccination cards could become compromised, as it is a potential issue, by having people in blocks we could easily achieve 7,500 people inside the stadium and that would have been a huge boost for the team," he said.

Kingston and St Andrew Football Association (KSAFA) President, Wayne Shaw, said he is also very unhappy at the news and he's worried and hopeful the next home game against Mexico in January is not too late to bring out the supporters.

"I am very disappointed. The JFF needs the support and the team needs the support. Having people just wanting to support the team, I thought was an ideal opportunity to get people vaccinated," said Shaw.

Former Reggae Boy Tyrone Marshall said although the team needs the support, he believes the Government took the decision with the health and safety of the general populace in mind.

"It is tough. You want the support but you have to look out for the overall interest of the population," said Marshall.

"It has been very difficult for them (Reggae Boyz) not having spectators, as having home field advantage helps the side tremendously, especially given the magnitude of this game. So it is a tough one, but you also have to look at the bigger picture, so we can combat COVID-19 and everyone can be in the stadium in the near future and we can have that home crowd advantage again," he stated.