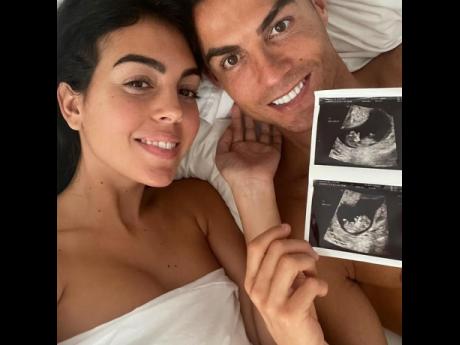 Manchester United footaball star, Cristiano Ronaldo, has announced that he and his partner, Georgina Rodriguez, are expecting twins that will make the 36-year-old the father of six children.

Ronaldo shared the exciting news with his followers on his official Instagram page on Thursday, alongside a photo of him lying in bed with Rodríguez while holding up ultrasound photos.

"Delighted to announce we are expecting twins [baby emojis]. Our hearts are full of love - we can't wait to meet you [red heart and house emojis] #blessed," Ronaldo captioned the post.

Already a Dad of four, Ronaldo admitted in 2017 that he wanted to be a father of seven.

Cristiano and Georgina met in 2016 and will welcome their second and third child together, as he and Rodriguez already share daughter Alana, who is three.

Ronaldo also has a son named Cristiano Jnr, 11, with an anonymous mother, and twins from a surrogate, Eva and Mateo, both four.

One of the most decorated football players of all time, Ronaldo has always expressed that being a Dad brings him another kind of joy.

The football superstar rejoined Manchester United in August of this year, after playing  with Juventus since 2018.

He previously played with Manchester United for six years from 2003 to 2009.

The father of four then played for nine years for Real Madrid from 2009 to 2018.