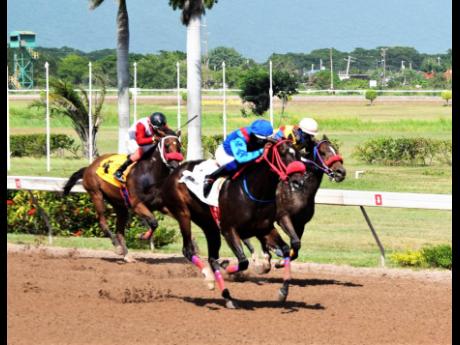 PRNCSSHOOTINGSTAR's manner of victory on debut, eased in 46.3, after an opening quarter of 22.3, was an awesome display of sprinting, reminiscent of her sire, Buzz Nightmare, making her a frightening prospect with 116lb in Saturday's Cash Pot 'Only One For Me' Trophy at six furlongs.

Though facing what appears to be a smart colt, PERFECT BREW, who also won on debut, dismissing RUPUNZEL under a hand ride from Oshane Nugent to clock 1:00.4 for five furlongs round, PRNCSSHOOTINGSTAR's acceleration was truly a sight to behold.

The only question to be asked of the Khaleesi's Revenge-foaled speedster is her lack of race experience on the round course, jumping from four furlongs straight on debut. Philip Feanny twice asked that question at exercise and the filly responded with an easy 1:07.3 for five and a half furlongs, followed by 1:00.2 for five, ticking those boxes with ease.

It's rather interesting to note that PERFECT BREW's stablemate, SLAMMER, who lost by a half-length to experienced TEKAPUNT on debut, got the better of him at exercise in a six-furlong spin. Even though PERFECT BREW turned the tables on him in a five-furlong gallop on Sunday, they both return treated with lasix, suggesting either might have bled at exercise.

Meanwhile, FATHER PATRICK returns tuned to the second off a two-and-a-half month break, facing familiar foes in the Cash Pot 'Super Dash Trophy', an open allowance at five furlongs round.

FATHER PATRICK ran one of his worst races ever last time out in August's Blumenthal Trophy, a struggling next-to-last finish behind horses who he had beaten in his three previous events, bar a close third-place run behind upsetter EAGLE ONE and KING ARTHUR in the Eros Trophy.

Carrying 121lb with Romario Spencer, who knocked off nine pounds with his claim, FATHER PATRICK shimmied to his right at the start, bumping into AWESOME TREASURE, before being straightened out.

Though leading EROY down the backstretch, FATHER PATRICK never seemed the same horse of his three previous runs, lugging in splits of 35.2 and 47.3, before surrendering to his pursuer coming off the home turn.

The FATHER PATRICK of his three previous races had twice dipped under 46.0, clocking 45.4 for half-mile splits, his slowest five being 58.3 and fastest 57.4, compared to the 59.3 in which EROY pulled away from him in the Blumenthal.

It appears as though FATHER PATRICK's May 15 to July 17 campaign, four tough races off the break, of which he won two and lost another to EAGLE ONE in a driving finish, might have taken a toll on the Ian Parsard runner in the Blumenthal.

After dismissing stablemates PATRIARCH and GOD OF LOVE to beat EAGLE ONE in the July 17 Hall of Fame Stakes, FATHER PATRICK hardly did anything at exercise for a whole month, reporting for the Blumenthal with a tame 1:16.4 for six furlongs a week before the event.

This time around, FATHER PATRICK has been catching birds at exercise alongside his fearsome stablemates, SHE'S A WONDER and MAHOGANY, plus impressive United States-bred JORDON REIGN's, who opened his account in 58.3 out of the straight last Saturday.