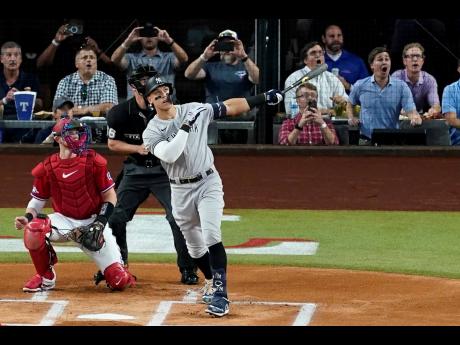 New York Yankees’ Aaron Judge follows through on a solo home run, his 62nd of the season, as Texas Rangers catcher Sam Huff (left) and umpire Randy Rosenberg (rear) look on in the first inning of the second baseball game of a double-header in Arlington, Texas, on Tuesday. With the home run, Judge set the AL record for home runs in a season, passing Roger Maris.

The owner of a sports memorabilia auction house says he has offered US$2 million to the fan who caught Aaron Judge's American League-record 62nd home run.

JP Cohen, president of Memory Lane Inc in Tustin, California, told The Associated Press on Wednesday that he has texted and emailed Cory Youmans, the man who caught Judge's milestone shot Tuesday night at Globe Life Field in Arlington, Texas. Cohen says Youmans has not yet replied.

"I feel the offer is way above fair if he is inclined to sell it," Cohen said in a telephone interview with the AP on Wednesday.

Youmans grabbed the historic souvenir on the fly as it sailed into the front row of section 31 in left field. The homer pushed Judge past Roger Maris for the AL season record - a mark many consider baseball's "clean" standard because the only National League players who hit more have been tarnished by ties to steroids.

Youmans, who is from Dallas, works in the financial world. He was asked Tuesday what he planned to do with the prize while security personnel whisked him away to have it authenticated.

"Good question. I haven't thought about it," he said.

The record price for a home run ball is $3 million, paid for Mark McGwire's record 70th from the 1998 season.

Cohen had previously pledged to offer $2 million for Judge's 62nd homer. He said his company has a good relationship with the Yankees and it would be willing to loan the ball to the team for an exhibit. He added the team has frequently exhibited items owned by Memory Lane at Yankee Stadium.

"We did make an offer of $2 million and that offer is still valid," Cohen said.